The bear and I saw Looper the other weekend and as usual we discussed the plot which at times didn’t deliver as much as punch a Bruce Willis and his younger self Joseph Gordon-Levitt movie should have delivered. 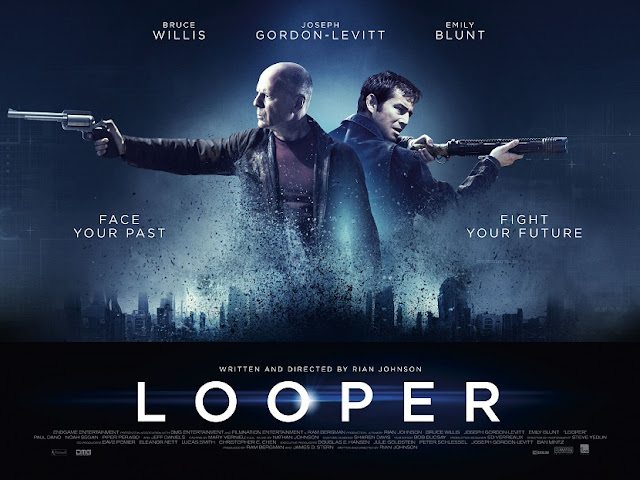 It was a good movie but since Avengers has ruined it for them all for me and every other movie would get is a just-good rating this year, sorry.

Anyway, the concept of fighting for the one you love is universal and a Hollywood theme song. Watching them die because of you and going to the past to change the course of history so that that one person doesn’t perish has not worked ever. Basically, the future cannot be unwritten due to a tweak in the activities of the past despite what Disney tells us. Cue lots of movie names I can’t list right now

The villain I believe will remain and become a villain maybe more powerful than before, considering he has already blown up a couple of people with his mind. What would be the fun in keeping that in check when everyone would be afraid of you and kowtow.

Mum is back in his life and keeps a safe she hides in whenever he gets cross. Excuse me hun, he may be able to blow that up too and one day, you wouldn’t be able to run that fast out of the door.

He already harbours anger at the pork pies you are telling about being his mum and you think calming him down and possibly nurturing him into a sweet little lad, who will blow up cute things like I dunno, would not prevent him from using it for evil. What on earth can you blow up that will be ok? Do you have an account for clean-up?

My point is Joseph Gordon-Levitt shouldn’t have killed himself, erasing Bruce Willis from the future, who would have watched his lover die and then come to the past to try and kill this little boy and instead kill his mum and make him angry and evil. He is too cute for that.

Until later,
Lots of love,
Vesta

Please connect your site to YouTube via this page before using this widget.