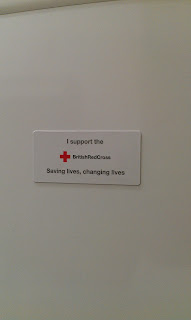 A couple of weeks ago, it was Sports Relief weekend. The
hubby and I were for a lack of choice (our Virgin TV had not been installed)
watching BBC1 and one of our favourite entertainers John Bishop was doing his
bit to raise money for people in need across the world. He cycled from Paris to Calais, rowed
across the English Channel and ran from Dover to
London in 5
days to raise money. For a child whose name I have forgotten now but the memory
of her hopelessness and fear of dying like her sister because of lack of clean
water still haunts me.

He was tired and bruised and bleeding and cold but dug deep
when he realised when it is over and people had donated, she would have a
chance of living a better life. It was so heartbreaking and we just cried and
watched it again the next day. The hubby said ‘these are the guys who would
have the gates of heaven thrown wide open for them’

I called mummy and she was also watching it and it was
heartbreaking to think that this is where we come from but we have allowed life
here to take over whilst people still die of malaria, cholera and lack of
proper medical care. There isn’t much you can do, you say. Say a prayer for the
man who lost his child so that he would not be bitter and may find joy and time
will heal his wounds, for the child who has not parents and sleeps in the
street when you have a pillow and central heating. For the mother whose child
drowned in sewage water when you don’t even see the waste that goes down the
drain.

I may have stopped crying but I will try never to let life
harden me or make me ever forget and if it is a couple of quid a week, please
sign up to a charity like Christian Aid and British Red Cross. So that as you
forget what it feels like to be hungry for days (or have never been), someone
will live better and survive another day.